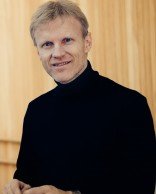 Håvard Gimse is one of Scandinavia’s most illustrious pianists, a musician of deep sensitivity and selfless regard for the text. He has an expansive repertoire of more than 30 piano concertos and is noted for his work as a recitalist and chamber musician. He currently looks forward to debuts with the Atlanta Symphony, the Philharmonia Orchestra and the Orchestre Dijon Bourgogne, in addition to the release of a new recording with Truls Mørk.

Håvard is one of the Nordic region’s most influential and significant
recording artists. His sympathetic approach and intelligent, investigative
programming have led to numerous prizes and countless glowing reviews. He has received the Diapson d’Or and Gramophone’s Editor’s Choice accolades, while his recent recording of works by Schubert and Schumann (with violinist Henning Kraggerud) was nominated for a Spellmanpris. Håvard has collaborated on recording projects with Truls Mørk and Christian Ihle Hadland, has recorded concertante works for Naxos and Simax (including the Grieg and Tveitt Piano Concertos), and in addition has appeared on the Sony, Fabra, Danacord, Naim and Chandos labels.

Håvard has performed on many of the world’s most prestigious stages including the Wigmore Hall in London, Carnegie Hall in New York, Palais

des Beaux Arts in Brüssels, the Concertgebouw in Amsterdam, the Recital
Hall in St Petersburg, the Suk Hall in Prague and the Konzerthaus in Berlin. In 2016 Håvard made his first appearance at the Norwegian Opera and Ballet as piano soloist in the company’s production of Anna Karenina.

Håvard was born in Kongsvinger, east of Oslo. He studied at the Hochschule der Künste Berlin with Hans Leygraf and later with Jiri Hlinka in Norway. His victory at the Jugend Musiziert Competition in 1987 was the first in a string of major accolades to come his way. He won the Steinway Prize in 1995, the Grieg Prize in 1996, the Sibelius Prize in 2004 and the
Norwegian Critics Prize for his performances of Beethoven’s Cello Sonatas with Truls Mørk at the 2011 Bergen International Festival.